Skip to content
billcoberly Bill is Grouchy About Something Trivial, Silliest Take of the Week August 15, 2017August 16, 2017 6 Minutes

Hello, all! It’s been a busy month for me of bar-exam-taking and then vacation-enjoying and then work-starting, but now let’s get back to the important work: making fun of silly articles from the Internet. We’re gonna spend some time today with two tweets and a proper, full-length Take that really deserves some thorough investigation.

That’s Not How Any of This Works

Chelsea Handler doesn’t like Donald Trump very much. Fair enough! Neither do I. Unlike most of us, however, Handler dislikes Trump so much that she suggested this:

Note the specific use of the word “generals,” which turns this tweet from a boilerplate call for impeachment into an outright call for a military coup.

We have a lot of fun here in the Silliest Take of the Week, but I’d like to go ahead and take a moment to urge everyone not to get so caught up in the #Resistance that we do stuff like this. “Our President is so damaging to American institutions and freedoms that I want the military to forcibly remove him from power” is not a very coherent line of thought.

I legit think he only blinks once in this entire video.

Anyway, on August 10th, he saw an upcoming cover of Vogue which featured a picture of Jennifer Lawrence in front of the Statue of Liberty. Here’s how he reacted: 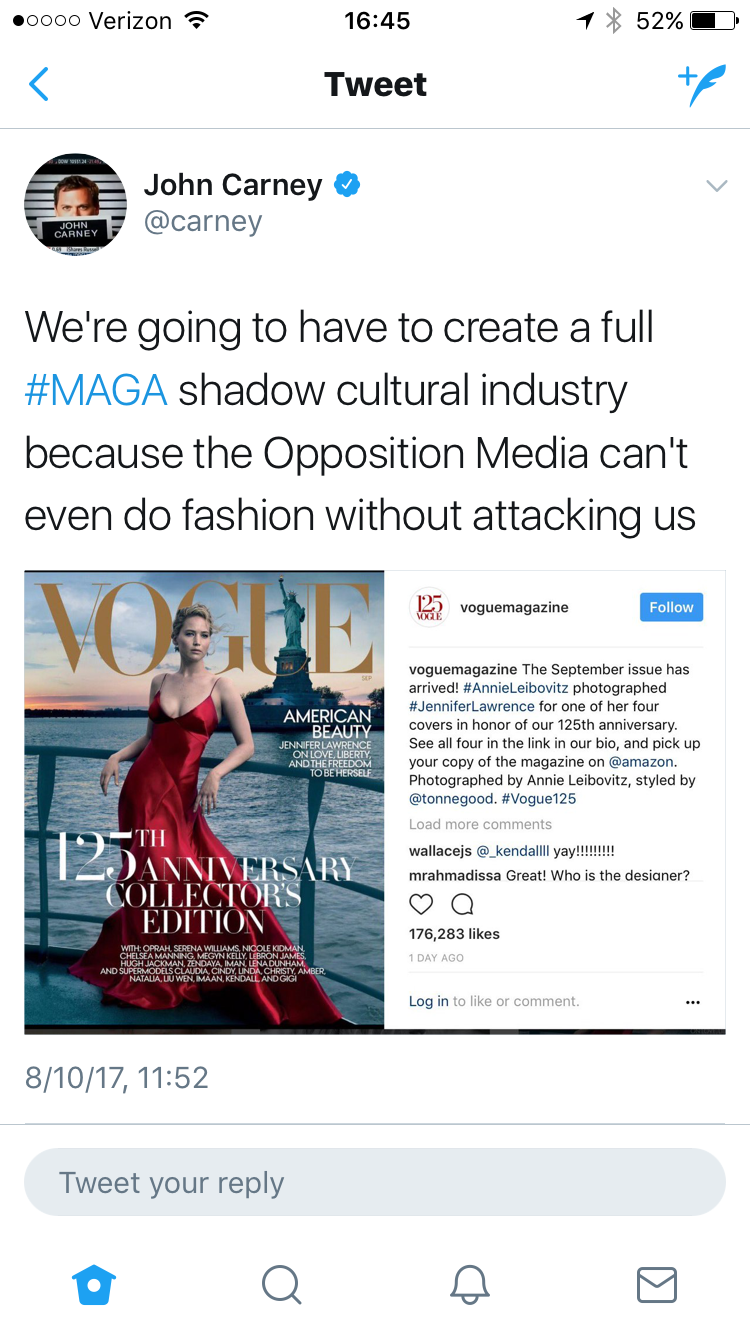 Given that nothing about this image seemed obviously critical of or even related to President Trump, some people politely asked Mr. Carney what he was referring to. He responded (in a now-deleted tweet) thus:

That’s right: the juxtaposition of a beautiful actress and the Statue of Liberty constitutes an attack on Trumpism. Lots of things are funny about this. First, it’s just real weird to take one of the most uncontroversial and popular symbols of the United States and interpret it as an attack on your own political philosophy. Next up, Mr. Carney will presumably also object to pictures of apple pie, renditions of “God Bless America,” and broadcasts of baseball games.

But the best part of this tweet is actually his proposal that the #MAGA crowd should create a “shadow cultural industry.” Imagine a Breitbart Style section, full of where to buy the best ill-fitting white polo shirts, and recommendations for how to get the douchiest possible haircuts. Imagine the runway at the Whitefish Fashion Week.

Rich Cohen, “Why Generation X Might Be Our Last, Best Hope”, Vanity Fair

A non-trivial percentage of the Silly Takes of the world are directed either at Millennials or Baby Boomers, usually written by a member of one generation about why the other is terrible and is the reason why America is going to the dogs. Hither comes Rich Cohen, a representative of the much-forgotten Gen X, to tread the jeweled thrones of both Millennials and Baby Boomers beneath his grouchy feet.

Cohen’s thesis is something like this: Millennials are bad because of cell phones and their inability to take a joke, and Boomers are bad because they don’t appreciate the sacrifices of the Greatest Generation. Gen X, however, is good, because its members mostly don’t care about things. But the Millennials and the Boomers together are conspiring to squeeze out and annihilate Gen X sentiments, so maybe we’re just doomed?

“[Millennials] are not literally the children of the baby-boomers but might as well be—because here you have two vast generations, linking arms over our heads, akin in the certainty that what they want they will have, and that what they have is right and good.

The members of the in-between generation have moved through life squeezed fore and aft, with these tremendous populations pressing on either side, demanding we grow up and move away, or grow old and die—get out, delete your account, kill yourself. But it’s become clear to me that if this nation has any chance of survival, of carrying its traditions deep into the 21st century, it will in no small part depend on members of my generation, Generation X, the last Americans schooled in the old manner, the last Americans that know how to fold a newspaper, take a joke, and listen to a dirty story without losing their minds.”

“We are a revolt against the boomers, a revolt against the revolt, a market correction, a restoration not of a power elite but of a philosophy. I always believed we had more in common with the poets haunting the taverns on 52nd Street at the end of the 30s than with the hippies at Woodstock. Cynical, wised up, sane.”

This feels a lot like “I’ve always felt a kinship with Hemingway,” which is the sort of thing that tiresome young men say to signal that you don’t have to listen to them any more.

“We do not believe what [the Boomers] believe but can imitate them if necessary. If I’m overly cautious with pronouns, for example, if I occasionally express sentiments that I do not believe, if I’m careful not to always say what I know—that the long arc of history does not in fact bend toward justice—that’s why. We watched [the boomers] at play, studying them as you study an older sibling. They blew pot smoke in our faces at parties and called us “little man,” but we persisted. We could hear them, as we lay in bed, racing up and down the street in muscle cars. The boomers at leisure were pop culture, but it was still the old America at school and at home.”

This doesn’t even make sense. Being “overly cautious with pronouns” feels like a reference to Millennial-era gender politics, not the Boomers, yet here it is in a paragraph complaining about the Boomers.

“We are the last generation to grow up with crappy video games, with actual arcades instead of quality home consoles. If you wanted to play, you had to leave the house and mix it up with the ruffians. That is, we are the last Americans to have the old-time childhood, wherein you were assigned a bully along with a homeroom teacher. Our childhood was closer to those of the 1950s than to whatever they’re doing today. It was coherent, hands-on, dirty, and fun.”

“We had to go outside to play our videogames.” Also, why would being “assigned a bully” be a good thing?

The above appears to be his thesis, that Gen X is just too detached and ironical to make any grand, tyrannical gestures, whereas the Boomers and the Millennials are both too eager to assert their will over others.

But this is my favorite paragraph, and it’s almost the last thing he says:

“I made it onto the plane just as the door was closing—this happened a few months ago. I found my seat next to a businessman who was as handsome as Cary Grant. He wore a beautiful suit and had a beautiful leather briefcase. His glasses were made by Armani. His hair was thick and dark and going gray at the temples, distinguished, and I realized, with a shock, that this man, this picture of elegant adulthood, was more than a decade younger than me, a member of another generation. He was working so furiously at his phone, concentrated and intense, that I craned over in hope of catching a phrase from whatever memo, launch plan, or prospectus he was hurrying to finish before the markets closed. What I saw shocked me. It wasn’t just that he was playing a video game but that in that game he was guiding a chimpanzee down a candy road. I stared at him and stared at him, but he did not notice. When the flight attendant told him to buckle his seat belt, he looked up. And the look on his face was one you see a lot now, blank and unfocused. A mole pulled out of a dark tunnel, yanked from a cheap and common dream.”

I get the impression that “I stared at him and stared at him, but he did not notice” is a fairly common theme in this writer’s life.

That’s it for this week! Tune in next week for more Silly Takes, and please send me the Silliest ones you can find over to sillytakes@gmail.com!

Lawyer and occasional writer based in western MN. View all posts by billcoberly